In 1868, North Carolina adopted a new State Constitution that provided for building a state penitentiary. Inmates began building the state's first prison, Central Prison, in 1870 and moved into the completed castle-like structure in December 1884. In 1881, the state leased two tracts of land near Raleigh for inmates to farm. State law 379 enacted in 1885 provided for the allowance of good time as an incentive for inmate cooperation.

As early as 1875, private employers could lease inmates as laborers. Under the lease, businesses had complete responsibility for the inmates. Many worked in rock quarries and built railways. In 1901, lawmakers changed the system to provide for contract inmate labor. Inmates worked for private employers, but prison officials retained responsibility for the inmates' custody.

A system of mobile camps developed that moved from worksite to worksite. By 1893, demand for labor contracts dwindled and most inmates went to work at leased farms.

In 1901, the Good Roads Policy provided inmate labor to build the state's roads. Horse-drawn prison cages that moved from one worksite to the next housed the inmates. In 1910, the incentive wage system began and inmates earned up to 15 cents a day, paid upon release.

In 1925, the General Assembly enacted a law changing the state's prison from a corporation to a department of state government. At that time, the state prison system included Central Prison, Caledonia Prison Farm, Camp Polk Prison Farm and eight road camps. Over the next eight years, six more road camps were added. By then, the facilities at these units were in deplorable condition for lack of regular maintenance and repair.

In 1931, the General Assembly enacted the Conner bill which enabled the state to take over control of all prisons and inmates. The condition of prison facilities and the need for inmate labor led the General Assembly to consolidate the State Highway Commission and the State Prison Department. This provided new construction money from the Highway Fund for prison renovation.

In the two years before consolidation, the State Highway Commission spent $850,000 for permanent improvements in the road camps that had been operated by the counties. With the help of WPA labor, the renovation and construction program continued after consolidation of the two agencies. In 1933, a $400,000 bond issue provided for establishing and equipping additional prison camps, farms and industries. Lawmakers authorized the State Highway and Public Works Commission to purchase, lease and erect buildings at new road camp sites. These permanent road camps were of a standard design and small capacity. The basic design was for 100 inmates. Camps were located throughout the state, primarily for the convenience of road building and repair.

In 1935, women inmates from Central Prison moved to a south Raleigh prison camp, the site of today's Correctional Institution for Women. Women from the Caledonia Prison Farm moved to the Raleigh facility permanently in 1956.

In 1957, the General Assembly separated the state prison department from the State Highway and Public Works Commission. As part of this change, the Council of State recommended consolidation of prison operations that resulted in the closing of prisons in Ashe, Beaufort, Brunswick, Chatham, Cherokee, Craven, Edgecombe, Hertford, Jackson, Macon, Perquimans, Pitt, Surry, Transylvania and Wilson counties. The prison properties were reassigned to other state and local governments or sold, except for two units that continued to be used by the Division of Prisons. The Pitt county facility became the Eastern Area Office and the Surry county facility became the Dobson training center.

In 1957, North Carolina became the first state to initiate a work release program that allowed inmates to work in private employment during the day and return to confinement at night.

In 1958, striped prison clothing was replaced with gray uniforms for close custody, brown for medium and green for minimum. In 1965, all prisons were desegregated.

In 1965, mental health services were established in prisons. The first mental health wards for inmates were built in 1973 at Central Prison. Mental Health Services established its first sex offender treatment program at Harnett Correctional Institution in 1991.

Correction staff, state and local police killed six inmates and wounded 68 others in quelling a riot at Central Prison in April 1968. Two state troopers and two correction officers were injured by ricocheting shot as prison officials regained control of the prison in the early hours of April 17.

In 1970, correction custody staff's job title changed to correctional officer from guard or matron. In 1974, the state Criminal Justice Academy was founded and began certification training for correction staff.

The Government Reorganization Act of 1973 created the Department of Social Rehabilitation and Control which included prisons, probation and parole and juvenile facilities.

In the early 1970s, the state prison system increased prison capacity for male youth constructing Western Youth Institution which opened in 1972 and converting state facilities into the Sandhills Youth Center in 1973; Fountain Youth Center in 1976; and Morrison Youth Institution in 1977. In 1978, state prison capacity increased by 822 with the addition of a number of modular housing units, mainly at minimum security prisons.

In the 1980s, a series of lawsuits filed by inmates complained about conditions in state prisons, mainly minimum and medium security units built in the late 1930's. Small v Martin, filed in 1985, affected 49 of these prisons. During this same time, annual prison admissions nearly doubled from 17,500 in 1986 to 30,800 in 1992. 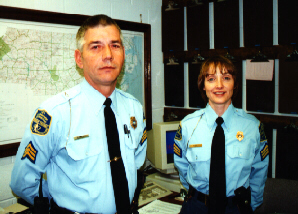 Gov. Hunt and Correction Secretary Franklin Freeman pushed the prison population from 20,351 at the end of 1992 to 30,775 at the end of 1996. They sped up planned construction, pushed through legislation for additional construction and leased space in county jails and out-of-state prisons to immediately meet the state's needs and bring an end to the policy of using early parole to free up prison space. Paroles decreased from a high of 26,784 in 1993 to 12,461 in 1996.

In 1993, the General Assembly enacted Structured Sentencing. It went into effect for crimes committed after October 1, 1994. The new criminal sentencing law replaced the Fair Sentencing statutes.

Under legislative direction, the department closed Richmond and Moore correctional centers in 1995. Earlier condition of confinement lawsuits had increased staffing requirements while reducing the number of inmates allowed at several of these 1930s-era prisons reducing the efficiency of operations.

Dan River's housing unit was the first major inmate construction project undertaken since inmate labor was used to build Central Prison in the 1890s. Opening the new Polk at Butner allowed the department to close the old Polk prison on Blue Ridge Road in Raleigh.

In the legislative session that ended in October 1998, the General Assembly ordered the closing of Alexander, Martin, Mecklenburg and Sandy Ridge correctional centers and eliminated lethal gas as a method of execution.

Secretaries of the North Carolina Department of Correction

Office of the Secretary