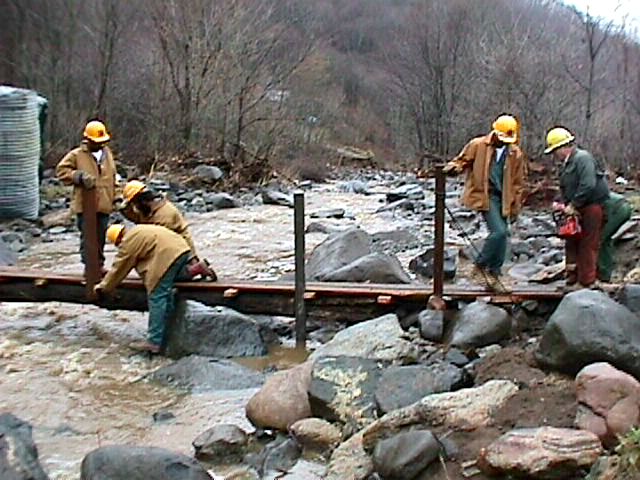 The BRIDGE Program is a cooperative effort of the NC Division of Prisons the NC Division of Forest Resources to train and utilize young non-violent inmates. BRIDGE provides rehabilitation and education while helping manage the state's natural resources.

BRIDGE, which stands for BUILDING, REHABILITATING, INSTRUCTING, DEVELOPING, GROWING, EMPLOYING was conceived in 1985 primarily as a result of the serious mountain fires North Carolina experienced that year. The idea was not new, but those fires spurred action.

BRIDGE started in Burke County while searching for a permanent first camp. In January of 1986, the first inmates joined program and began an intensive process of training in mountain fire control. The beginning was small, only 18 minimum-custody inmates from 18 to 21 years of age. In 1987, the Avery County commissioners invited the first permanent camp to be built there and construction started with money appropriated by the General Assembly. The inmates, called crewmen, were used to construct the camp, which became Blue Ridge Youth Center and was later re-named Blue Ridge Correctional Center.

The first crewmen moved into the facility in November of 1990. A second dorm was completed in 1992 which brought the total capacity to 48.

Meanwhile, in Burke County, the crews became so useful that the Burke County commissioners requested that a camp continue operating there. This also better served the Division of Forest Resources needs due to a heavier fire occurrence in that area.

The primary goal of the program is to have a well-trained and equipped fire fighting force ready at a moment's notice. A secondary, but important goal, is to develop a strong work ethic and work skills so inmates will be able to secure a job when they are released. Nationally, the rate of return to prison for this age group is about 35%. Early statistics show only 12% of BRIDGE. "graduates" are likely to return.

To date, more than 1,700 crewmen have gone through the program. They are paid the standard rate of $1.00 per day. This results in a great benefit to the Division of Forest Resources over hiring fire crewmen from the general population.

Blue Ridge Correctional Center closed in October 2002, but BRIDGE continues to operate at Western Youth Institution in Morganton.  It has proven to be a success in supplying firefighting forces, rehabilitating inmates and in saving the Division of Forest Resources thousands of dollars each year.